I got my invite for Google+ tonight. So far so good – it has some great features, but there’s one problem: No one is on it!

So with little to review off the bat, these are just some of my thoughts on Google’s new social site off the top of my head: 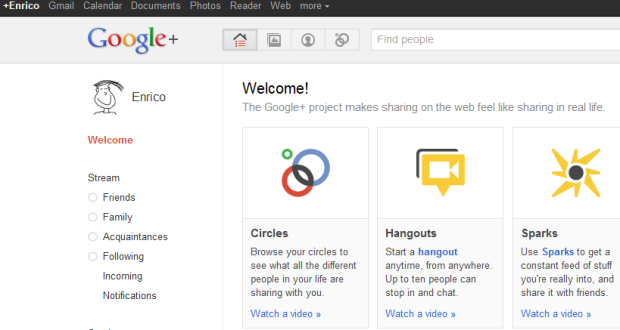 Google+ is in that persnickety “Invite Only” mode, like back when they debuted Gmail. Of course, I could use Gmail to get in touch with anyone. Here, I have to add my contacts to Circles – collections of friends – and hope they see this in their e-mail, join, then (I suppose) add me back so we can chat.

So like Facebook, there’s no public chatting area – everything revolves around your existing contacts. In fact, there are a lot of things about this that are very Facebook, but I don’t blame them for that. Wave was original and brilliant, but no one used it. If people don’t respond to original, by all means steal what has worked in the past.

Something I like off the bat with this that isn’t on Facebook is the ability to create chat groups that use webcams called Hangouts. I don’t know how willing most people will be to use their webcam, since so few people are as unabashedly into their good looks as I am. It’s definitely a good feature though, and I can’t wait for someone I know to join in with me already! One thing is for sure, though: Free web cams, on a social media site, means there is going to be a lot of porn on Google+ before long, unless there are some seriously draconian terms and conditions in place.

It uses Picasa for the photo album, which I suppose means I’ll need to start actually using Picasa. It also uses Gtalk for IMs, which I like, because I’ve been using that forever. (It has been kicking the ass off of Yahoo! Messenger since it first arrived.) I expect all of Google’s purchased properties will turn up here eventualy – and maybe even their failed concepts, like Buzz and Wave.

Also, that +1 feature is, as you’d expect, all over this site. It’s their version of +1. Another Facebook rip-off? Maybe. But remember, Facebook ripped off Likes from Friendfeed – and they didn’t even bother to use a different word.

Anyway, it’s just the first night, so it’s hard to judge Google+ just yet. I have high hopes, though – I’ve been a Google fanboy for years, and I’m praying something can finally kill Facebook.